In this session we are going to understand how we can run applications using the binary compatibility layer as well as the inner workings of the system call shim layer.

One of the obstacles when trying to use Unikraft could be the porting effort of your application. One way we can avoid this is through binary compatibility. Binary compatibility is the possibility to take already compiled binaries and run them on top of Unikraft without porting effort and at the same time keeping the benefits of unikernels. In our case, we support binaries compiled for the Linux kernel.

At this stage, you should be familiar with the steps of configuring, building and running any application within Unikraft and know the main parts of the architecture. Below you can see a list of the commands you have used so far.

A system call is the programmatic way in which a process requests a privileged service from the kernel of the operating system.

A system call is not a function, but specific assembly instructions that do the following:

For example, on 32bit x86 architecture, the system call identifier is stored in the EAX register, while parameters in registers EBX, ECX, EDX, ESI, EDI, EBP.

Usually an application does not make a system call directly, but call functions in the system libraries (e.g. libc) that implement the actual system call.

Let’s take an example that you can see in the below image: 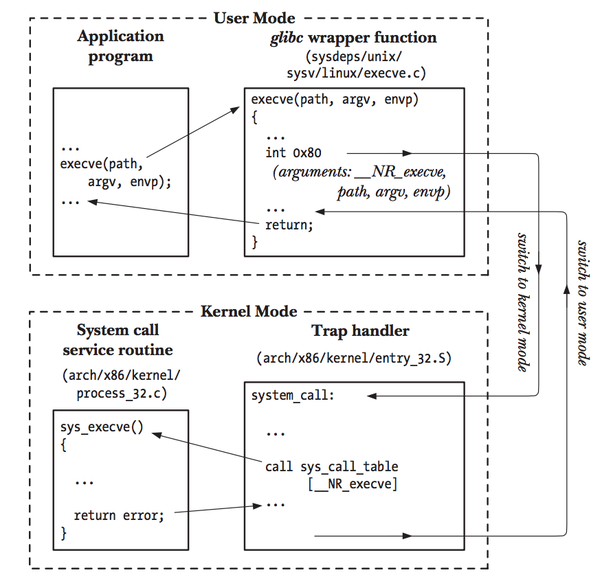 Now, let’s take a quick look at unikernels. As stated above, in Linux, we use system calls to talk to the operating system, but there is a slight problem. The system calling process adds some overhead to our application, because we have to do all the extra operations to switch from user space to kernel space. In unikernels, because we don’t have a delimitation between kernel space and user space we do not need system calls so everything can be done as simple function calls. This is both good and bad. It is good because we do not get the overhead that Linux does when doing a system call. At the same time it is bad because we need to find a way to support applications that are compiled on Linux, so application that do system calls, even though we don’t need them.

01. The Process of Loading and Running an Application with Binary Compatibility

For Unikraft to achieve binary compatibility there are two main objectives that need to be met:

After the unikernel gets the binary the next step is to load it into memory. The dominant format for executables is the Executable and Linkable File format (ELF), so, in order to run executables we need an ELF loader. The job of the ELF Loader is to load the executable into the main memory. It does so by reading the program headers located in the ELF formatted executable and acting accordingly. For example, you can see the program headers of a program by running readelf -l binary:

The loader that we currently have implemented in Unikraft only supports executables that are static (so all the libraries are part of the executables) and also position-independent. A position independent binary is a binary that can run correctly independent of the address at which it was loaded. So we need executables that are built using the -static-pie compiler / linker option, available in GCC since version 8.

As stated previously, the system call shim layer in Unikraft is what we use in order to achieve the same system call behaviour as the Linux kernel.

Let’s take a code snippet that does a system call from a binary:

All the above functions are generated, so the only thing that we have to do when we want to register a system call to the system call shim layer is to use the correct macros.

There are four definition macros that we can use in order to add a system call to the system call shim layer:

The above two macros will generate the following functions:

For the case that the libc-style wrapper does not match the signature and return type of the underlying system call, a so called low-level variant of these two macros are available: UK_LLSYSCALL_DEFINE, UK_LLSYSCALL_R_DEFINE. These macros only generate the uk_syscall_e_<syscall_name> and uk_syscall_r_<syscall_name> symbols. You can then provide the custom libc-style wrapper on top.

The next step is to define the function using the correct macro:

And the raw variant:

The last step is to add the system call to UK_PROVIDED_SYSCALLS-y in the Makefile.uk file. The format is:

The binary compatibility layer is a very important part of the Unikraft unikernel. It helps us run applications that were not build for Unikraft while, at the same time, keeps the classic benefits of Unikraft: speed, security and small memory footprint.

Session support files are available in the repository. If you already cloned the repository, update it and enter the session directory:

If you haven’t cloned the repository yet, clone it and enter the session directory:

For the practical work we will need the following prerequisites:

Set the repositories in a directory of your choosing. We’ll call this directory <WORKDIR>. The final directory structure for this session should look like this:

The goal of this task is to make sure that our setup is correct. The first step is to copy the correct .config file into our application.

To check that the config file is the correct one, go to the app-elfloader/ directory and configure it:

If everything is correct, we can run make and the image for our unikernel should be compiled. In the build folder you should have the elfloader_kvm-x86_64 binary. To also test if it runs correctly:

Because we did not pass an initial ramdisk, the loader does not have anything to load, so that’s where the error comes from.

02. Compile a Static-Pie Executable and Run It On Top of Unikraft

The next step is to get an executable with the correct format. We require a static executable that is also PIE (Position-Independent Executable).

We go to the apps/app-elfloader/example/helloworld directory. We can see that the directory has a helloworld.c (a simple helloworld program) and a Makefile. The program will be compiled as a static PIE:

We can now run make so we can get the helloworld executable:

We can see above from the ldd and checksec output that the helloworld executable is a static PIE.

Now, the last part is to pass this executable to our unikernel. We can use the -i option to pass the initial ramdisk to the virtual machine.

We can see that the binary is successfully loaded and executed.

Now that we saw how we can run an executable on top of Unikraft through binary compatibility, let’s take a look at what happens behind the scenes. For this we have to compile the unikernel with debug printing.

Copy the config_debug file to our application folder:

We now have a more detailed output to see exactly what happens. The debug output is divided as follows:

When the unikernel is executing (so our loader application) there are two phases:

From this point forward, the binary that we passed in the initial ramdisk starts executing. Now all the debug messages come from an operation that happened in the binary. We can also now see the syscall shim layer in action:

In the above case, the binary used a write system call in order to write Hello world! to standard output.

Your task is to print a debug message between the Here we are in the binary and Getcpu returned message above and also make the sched_getcpu() return 0.

05. Inspect the program flow of an application.

Take the above C program and compile it directly into Unikraft. Inspect the flow of the program, see how we get from the application code to the library code and then to the unikernel code. After you see all the functions that get called, modify the program to skip the library code but still keep the same functionality.

Hint 1: You should call a function that is generated with the syscall shim macros.

We want to know how to make the next sessions better. For this we need your feedback. Thank you!

Was this page helpful?

Glad to hear it! Please tell us how we can improve.

Sorry to hear that. Please tell us how we can improve.